Kimbell Art Museum’s original building in Fort Worth, Texas, designed by Louis I. Kahn, opened in 1972, and is considered an outstanding architectural achievement. The vaulted roofs suggest the grand arches and vaults of Roman architecture. The principal materials are concrete, travertine, and white oak. With the building and grounds approaching forty years of service, there were conditions to be addressed.

The interior floors are a combination of travertine and white oak. Areas of travertine stone floors were developing cracks and broken stone. Rather than replacing the stone, it was decided to perform repairs, clean, and seal the travertine. Areas of the museum were closed to the public, and the artwork was removed and stored. The portions of broken and cracked travertine stone were removed, pieces were cut and chipped as required to fit the damaged areas and inserted to match the existing grains of stones. Travertine is characterized by pitted holes and troughs in its surface which were to remain, making the stone difficult to clean. Harper Brawner specified specialized products and procedures to clean and seal the travertine floors and walls. The result was an excellent masking of damaged areas of stone.

At the exterior, travertine had been used at transition areas of walks such as steps and entries. Where possible, the existing stone was allowed to remain and was repaired in the same manner as interior stone. However, there was much stone that had to be removed and replaced with matching travertine obtained from a quarry in Italy. After repair, the exterior stone was cleaned and sealed.

Exterior walls of the museum are a combination of concrete and travertine surfaces. A few travertine wall panels had cracked and broken corners that were repaired in the same manner as the interior floors, by fabricating small replacement pieces. Upon removing sealant to replace the joints between travertine panels, it was discovered that the original method of hanging the travertine panels was failing and removal of the sealant was allowing the wall panels to move. Small holes were drilled in the wall panels, steel pins were inserted to secure the travertine to the underlying concrete, and the holes were filled with a travertine compound selected by Harper Brawner to make the pinning holes invisible.

In conjunction with repairing stone wall panels, there were cracks in the concrete wall surfaces that required repair using polymer modified repair mortar that had been color-matched to the existing concrete. After concrete surfaces and travertine wall panels had been repaired, and after sealant joints had been replaced, the concrete and travertine walls were cleaned with a chemical cleaning process that removed the majority of staining. A clear water repellent was applied to both the concrete and stone to assist in keeping the walls clean.

The visitor’s parking lot was cut stone paver surfacing on a thin mortar base over poured-in place concrete and the existing stone was cracked and broken in many areas. An extensive process of selecting replacement stone was used and the final selection was from a quarry in Northern Italy, using the same type of stone used in Europe for centuries as cobblestone streets. The selected blend of colored stone pavers was felt to be reasonably close to the color blend originally used by Louis Kahn.

For the stone in the parking lot to work without cracking, a deeper mortar bed was required than had been provided with the original stone pavers. This was accomplished by grinding approximately one half inch off the top of the underlying concrete surface and raising the elevation of the parking lot by half an inch and thereby gaining an additional one inch for the paver’s mortar bed.

Since the installation process for these stone pavers at the parking lot was different than typically employed in the United States, the quarry in Italy sent two representatives to assist in training the installers. A relatively dry mortar bed is placed and the stones are individually pounded into place with a rubber mallet. Due to the Texas heat, tents were used to assist in preventing the mortar from drying too quickly.

As part of the Harper Brawner parking lot design, dark stone were selected and installed to create parking stripes. After all the stone was installed, expansion joints were saw cut, the stone was cleaned, and a clear water repellent was applied. The final result is a long term parking lot surface with excellent appearance.

At the cast-in-place concrete wall behind one of the three exterior fountains, there was a large amount of cracking in the concrete and significant staining resulting from water absorption in the cracks. Replacement of the concrete wall was not an option due to adjacent construction for museum expansion. With a requirement for the wall to remain in place, Harper Brawner was required to develop a method of providing a new face for the concrete wall.

The first step was to provide epoxy injection at the cracks. The face of the concrete was chipped and hammered to remove approximately 1/4″ of surface and to provide a rough texture to promote bonding of new repair mortar. A color-matching polymer modified repair mortar was specifically formulated to be poured into the narrow space of approximately 1/2″ between the form-work and existing concrete, and to flow with vibrating to assure a smooth finish upon removing the forms. The result was crack-free concrete that matched the adjacent areas of concrete.

At the roofs, there had been no provisions for attaching OSHA-required safety harnesses for workers required to be on the roofs. At the ends of flat areas of roofing, roof anchors for attachment of safety equipment were installed by bolting to the concrete roof deck and the anchors were tested to verify adherence with load requirements. At vaulted roofs, continuous cables were installed that would allow attachment of safety lanyards. Attachment devices for the cables were bolted to the existing structure and the cables were stretched to comply with load requirements.

Although the roof was not leaking into the interior, blisters were forming in the flashings. With multi-million dollars’ worth of artwork at the interior, Harper Brawner could not recommend the roof continue to deteriorate. The gravel was vacuumed from the roof and the remaining roof membrane was spudded. To install the new roof system, the bottom row of metal had to be removed from the vaults and then be reinstalled after the flashing system was installed. A two-ply modified bitumen overlay roofing system was installed with new gravel ballast. Concrete pavers were installed at the areas with the greatest foot traffic.

Harper Brawner was asked to review the existing lead-coated copper roofing due to areas of significant discoloration. It was discovered that the finish on the metal was failing and delamination due to a manufacturing defect. Potential replacement of the metal was investigated using a number of different types of metal. However, based on Harper Brawner recommendations, it was decided to encapsulate the finish on the existing metal using a translucent silicone-based elastomeric coating.

Although many methods of cleaning the metal roof prior to coating were investigated, since the problem was delamination, the appearance could not be improved. A simple cleaning process was used and coating was applied. There is an initial sheen inherent with the silicone coating, but the sheen subsides after about two months. The original museum appearance was maintained, the delamination problem solved, and the life of the metal roofing extended by at least twenty years.

The fountains had a number of issues to address. The stone and concrete surfaces required cleaning. Harper Brawner worked with contractors to perform sample cleaning procedures and then specified the cleaning processes. The water within the pools was intended to have a smooth surface, but with age, the pumping system was erratic and causing rough surfaces with splashes. The piping that supplied the fountains leaked and after investigation of providing liners within the pipes, it was decided that the best way of correcting the water issues was to completely replace the piping and to replace the pumping equipment. Harper Brawner worked with an engineering consultant for the design of the piping and pumping equipment.

In addition to the fountain water surface being rough, water was extending up on the travertine stone walking surfaces at the fountain edge creating slick surfaces for pedestrians and exacerbating damage to the stone-face. To address this issue, stone at the dividing walls within the fountains was removed. Broken stone were replaced. All stones at the dividing wall were shortened by 1/2″ and then were reset which effectively lowered the wall and the water level sufficiently to keep water off the adjacent travertine walking surfaces. After the stone wall was reinstalled, a new stainless steel drip edge was installed. The result was a clean pool with no broken stone and a smooth water surface.

With all the other restoration work being performed, the overall project at the museum ultimately involved nine individually negotiated contracts with nine contractors performing work of different types. Harper Brawner assisted in coordinating the contractors who were all performing work at the same time while the museum remained in operation. 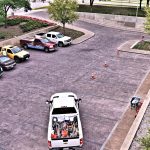 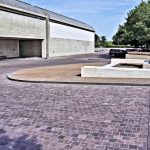 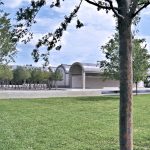 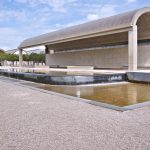