The hotel had deteriorated conditions in the window systems, joint sealants, and the Exterior Insulation Finish System (EIFS) walls. Harper-Brawner was retained to investigate the cause of moisture intrusion and design the required remedial procedures. There was random cracking within the EIFS walls and deterioration in the EIFS at the wall areas receiving sealant joints. The sealant was deteriorated and beginning to fail both in adhesion and cohesion.

With investigation of the window system, it was discovered that the original gaskets had shrunk and no longer sealed the glass against moisture intrusion. Previous efforts at wet-glazing the glass to the frame had failed due to the fact that the configuration of the frame did not allow sufficient metal to receive a sealant joint. The glass was also streaked from lime bleeding out of cementitious products in the EIFS system and could not be cleaned using typical window cleaning methods. During design, Harper-Brawner developed a method of sealing the glass to the frame using extruded silicone products.

Cracks within the EIFS were discovered to be caused by excessive space between the underlying insulation board in the EIFS system and a method of repair was specified. Extruded silicone was used to seal building joints in a manner that eliminated the large amount of EIFS repair that would have been required to repair the joints prior to installing a recessed sealant joint. During construction, Harper-Brawner worked with the contractor’s staff on the swing stage to verify proper installation of the designed repair procedures. The repairs were completed with the application of a waterproof wall coating system. 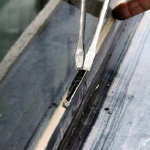 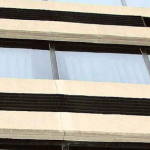 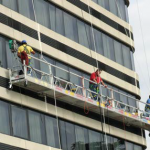 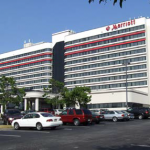